During the concert, the audience heard the most beautiful arias from the Orfeo & Majnun opera. Two myths, the East and the West, the European world and the Middle Eastern world – they could seem to be entirely different, but love is equally strong, longing is equally painful and death leaves the same void in both of them. The Greek myth of Orpheus and Eurydice and the Arabian story of Layla and Majnun show that although cultures may differ in many aspects, human desires and passions are similar everywhere.

He studied in Gdańsk, Kraków and Vienna under the direction of R. Delekta, W. Michniewski, J. Przybylski, M. Guidarini, J. Kaspszyk or C. Metters. He was the laureate of prestigious programmes – e.g., “conductor-in-residence” or “composer-in-residence” – of the Institute of Music and Dance. He regularly collaborates with the Silesian Opera, La Monnaie in Brussels, TW-ON in Warsaw and Cappella Gedanensis. He has conducted a few hundred chamber and symphony concerts and – also as a musical director – several operas, including Il Trittico by Giaccomo Puccini, Cosí fan tutte by Wolfgang Amadeus Mozart, Orfeo ed Euridice by Christoph Willibald Gluck or the Polish premiere of Francesca da Rimini by Sergei Rachmaninoff. He regularly collaborates with the Teatr Wielki – Polish National Opera in Warsaw, the Brussels Royal Opera House and the Cappella Gedanensis ensemble.

Two-time winner of the Polish National Vocal Competition Impressio Art in Sopot. She received a distinction in 2012 and the second prize in 2015. For years, she has collaborated with Cappella Gedanensis as a soloist performing at many concerts of this band.

He was born in Wrocław. He is a graduate of the Guildhall School of Music & Drama in London and the Karol Lipiński Academy of Music in Wrocław, where he studied in the class of Professor Bogdan Makal. He was a student of the Opera Academy at the Teatr Wielki Polish National Opera in Warsaw. He debuted with the role of Mercutio in the Silesian Opera in 2017. Since then, he has acted in the La Monnaie de Munt in Brussels, the Teatr Wielki Polish National Opera in Warsaw, the Warsaw Chamber Opera, the Krakow Opera, the Wrocław Opera, the Silesian Opera in Bytom, the Opera and Philharmonic in Białystok, and during the Aix-en-Provence Festival, the La Valletta Festival in Malta and the Opera Rara Festival in Krakow. Winner of many Polish and foreign competitions.

Syrian singer. She was born in Kuwait and raised in Damascus. She currently lives in Austria. Basma has performed many soundtracks for TV series and films and participated in many music projects with renowned ensembles and orchestras. She has also recorded songs and performed live a few times. Basma sings in Arabic, English, German, Turkish and Kurdish. She has recently appeared in a short film Habibti, Let’s go directed by Fesih Alpagu and Our Strangers / Unsere Fremden with the Babylon Orchestra, directed by Barry Moss and Sina Salimi.

He was born in Nazareth, Palestine. He began his musical journey by studying classical violin at the age of 10; he participated in numerous concerts in his homeland and abroad. Later on, he started singing Arabic music influenced by his father. As a singer, he has participated in many festivals and TV programmes. He has recently taken part in two successful tours around his homeland. Nowadays, Loay studies oriental music at the Jerusalem Academy of Music and Dance.

Soloist, chamber musicians, teacher. Graduate of the Krzysztof Penderecki Academy of Music in Krakow in the piano class of Professor Andrzej Pikul and in the chamber class of Professor Janina Romańska-Werner. She also improved her skills under the direction of outstanding pianists, including Dina Yoffe, Kevin Kenner, Paul Badur-Skod and Boris Berman.

He was born in Rafah, Gaza Strip, Palestine, and earned a degree in music science at the University of Tripoli (Libya). Thanks to his knowledge of both popular and classic music, Moneim writes music for traditional and modern works of Palestinian and Arab poets. His compositions are an effort to maintain the musical tradition in the country standing on the edge between modernity and old customs.

Theatre, TV, film and dubbing actress. She graduated from the SPOT Acting and Television School in Krakow in 2004 and passed an external examination in the Drama Acting section of the Association of Polish Stage Artists (ZASP) in 2011. She acts in the Krakow KTO Theatre (plays: Ślepcy [Blind Men], Rondo [Roundabout], Leon i Matylda [Leon and Matylda], Zapach Czasu [The Smell of Time], DROM Śladami Romów [DROM In the Footsteps of Roma People]), Proscenium (Pojedynek, czyli gry i grymasy [Duel: Games and Grimaces], Theathrum Poeticum Anny Świrszczyńskiej [Anna Świrszczyńska’s Theatrum Poeticum]), Kamienica Theatre (My dzieci z Dworca ZOO [We, Children from the ZOO Station]) and the Theatre Study Centre from Warsaw (Wyzwolenie [Liberation]). Member of the Jorge Parente Ensemble (an international performance staged in Portugal, Canto por Ignacio Sanchez Mejias by F.G. Lorca). She has participated in many drama workshops in Poland and abroad in such countries as Portugal, France and India.

Composers of the Orfeo & Majnun opera and creators of the artistic vision:

He has vast experience in participatory projects and different operas composed for the most prestigious opera houses in Europe. He is responsible for music workshops and for musical works for the participatory choir.

He works intensively with musicians from different cultures. He is responsible for the overall composition and orchestrations of the music of the Orfeo & Majnun opera together with Arabic composer, lute player and singer Moneim Adwan, who writes vocal lines for protagonists and orchestrations for Arabic musical works.

Co-author of the project together with Martina Winkel, he is a theatre maker by profession. He has developed numerous large-scale participatory since his tenure as Artistic Director for Performing Arts in Linz – European Capital of Culture 2009. In Orfeo & Majnun, he is responsible for the artistic vision and communicating the project into the diverse communities of cities, the training of trainers and animators, numerous drama workshops, the preparation of the processions and the co-direction of stage forms.

She has written and directed numerous performances – for example, she wrote the libretto for the Kepler opera by Philip Glass – and has participated in numerous participatory educational projects in Austria, Holland, and Belgium. In Orfeo & Majnun, she is responsible for the libretto and co-direction of the musical and theatrical performance, scenography and live shadow elements, as well as for texts and puppetry workshops. 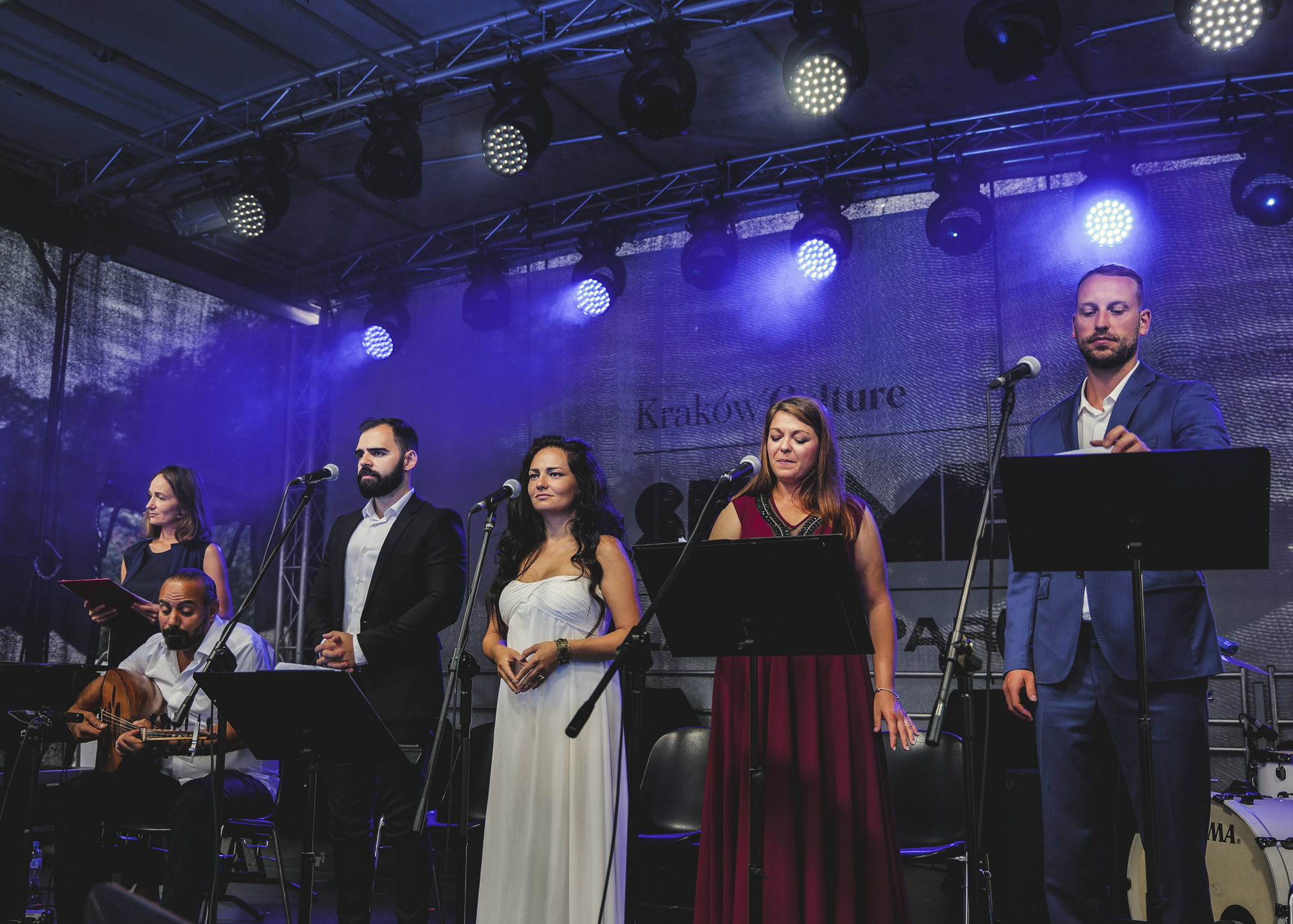 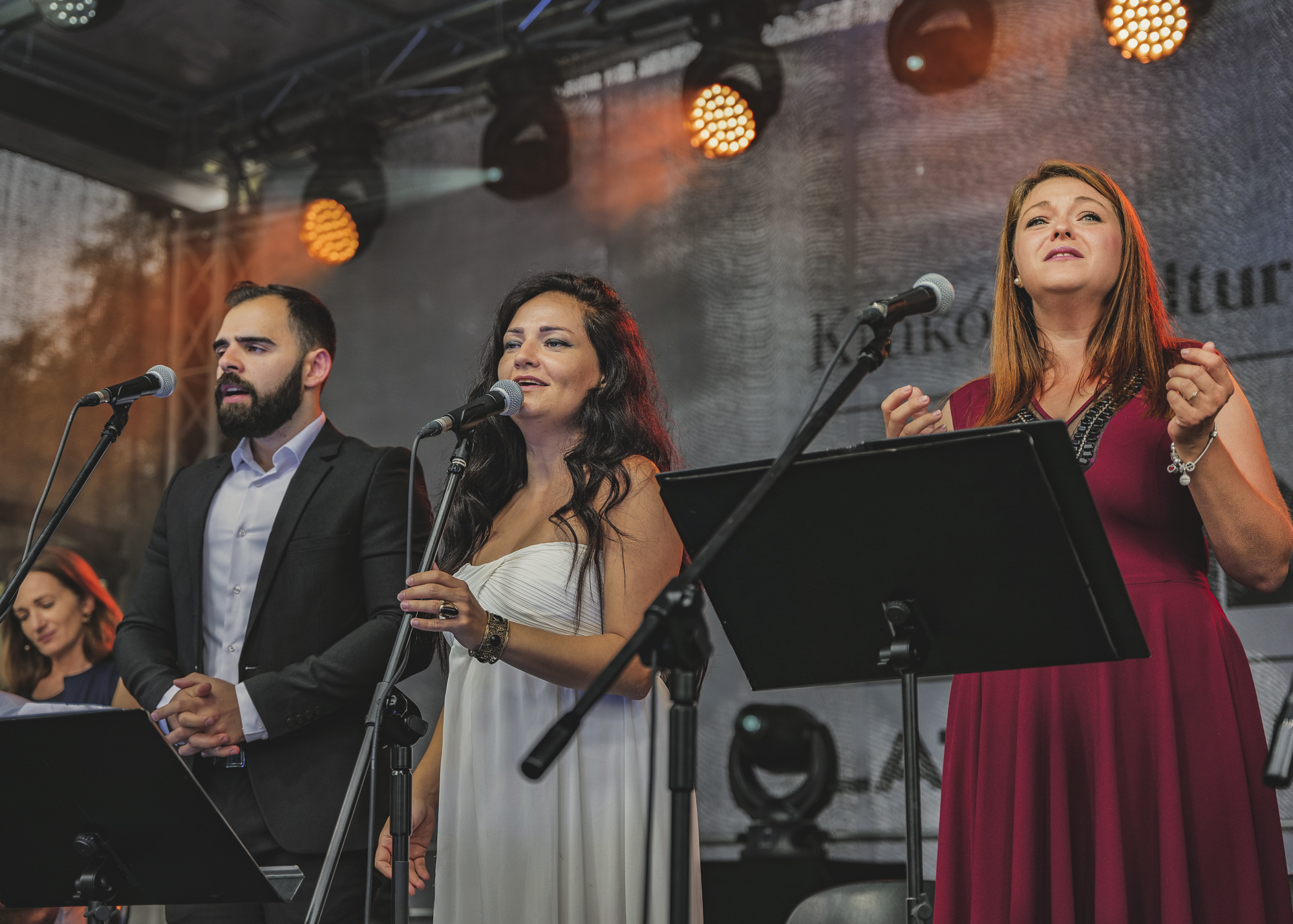 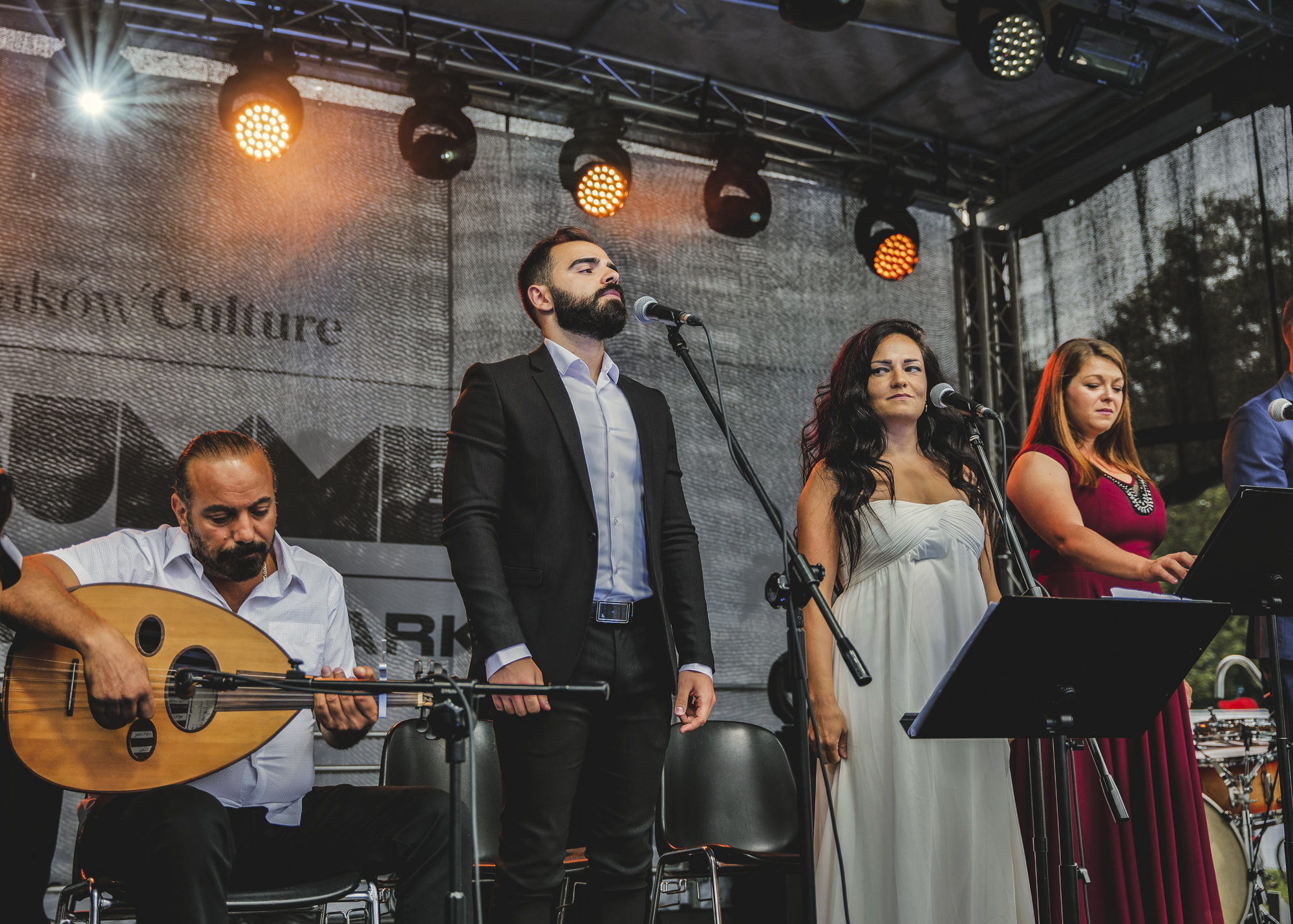 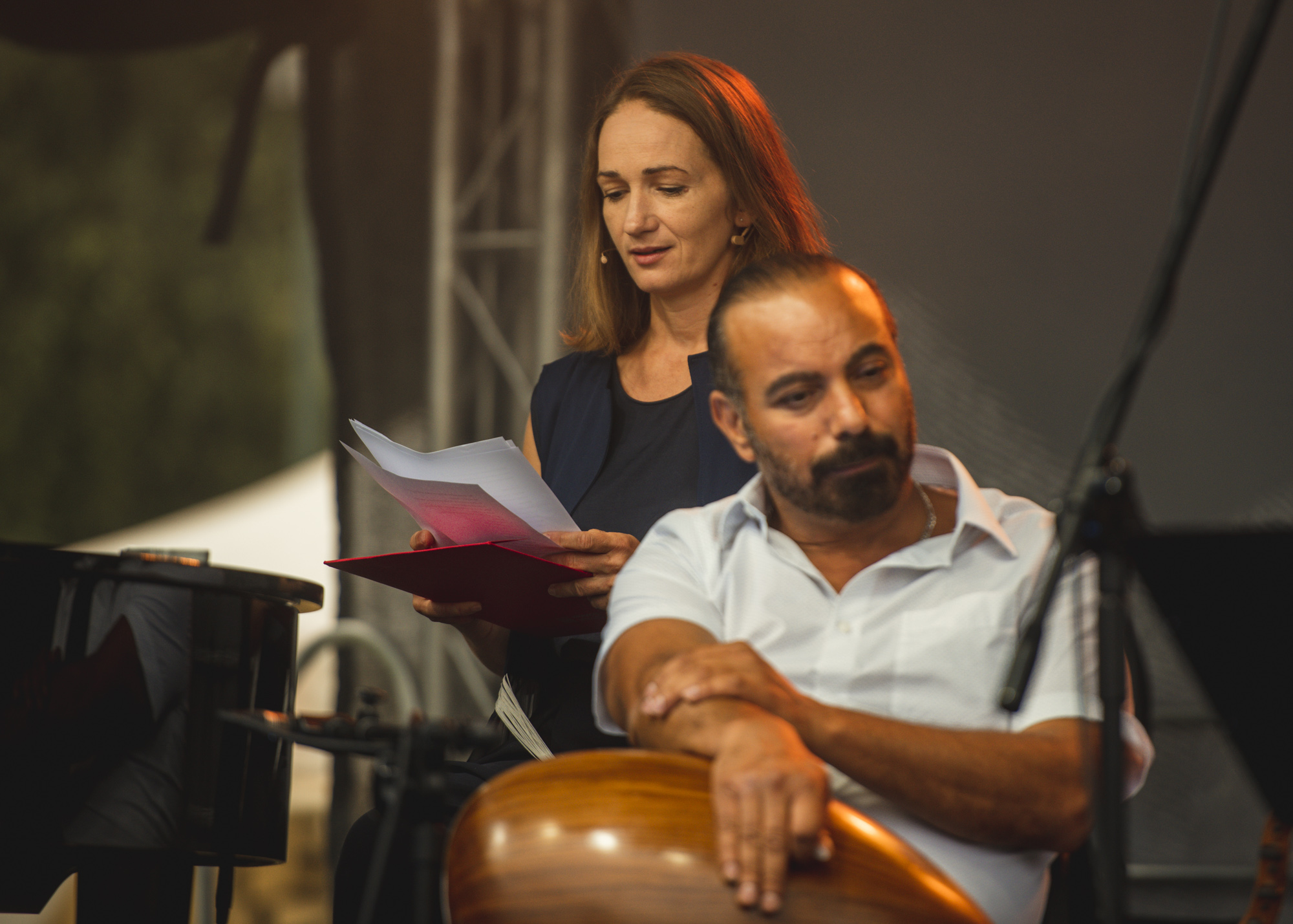 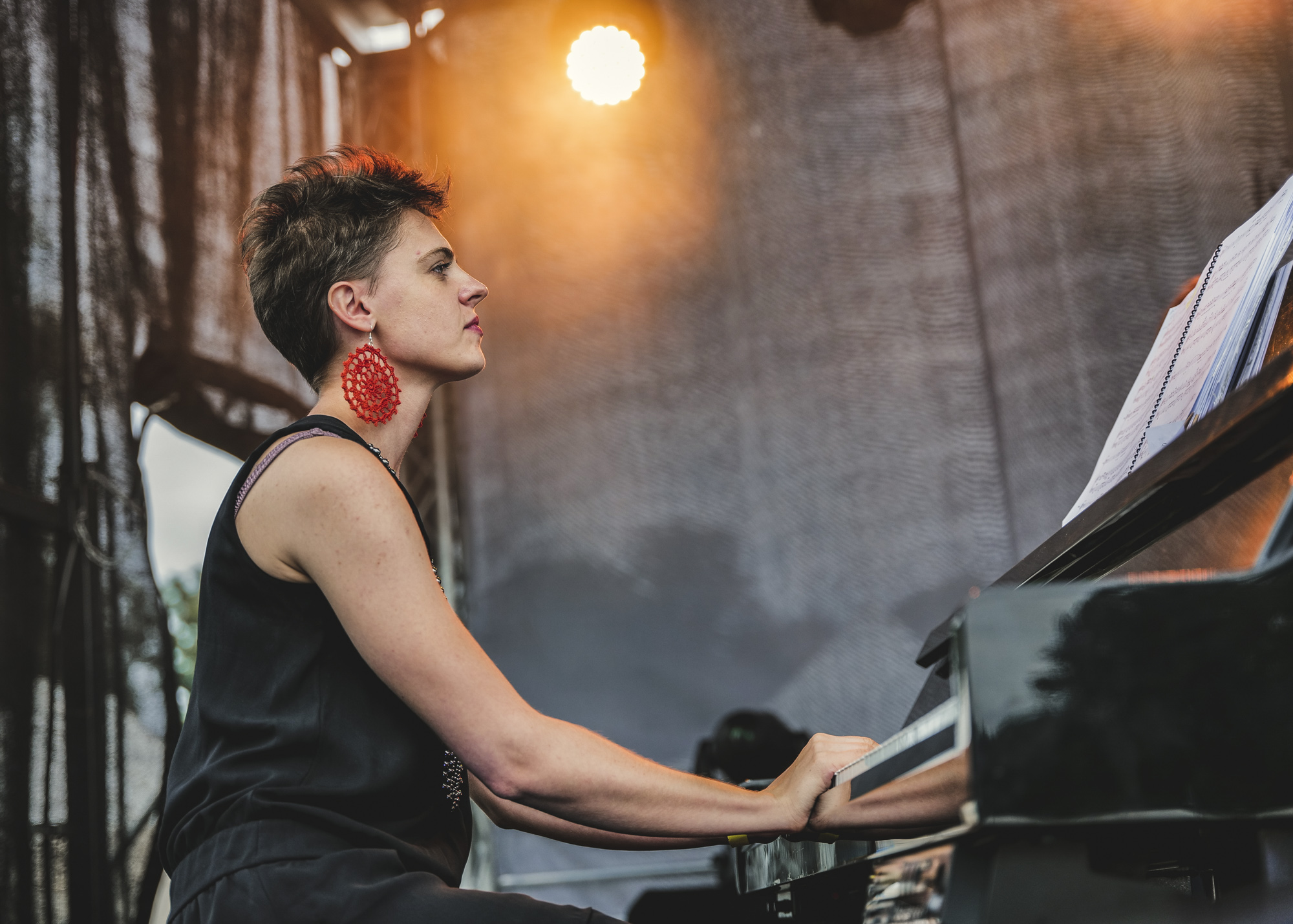